For a while now, I've been convinced that if someone understood baseball, I could explain cricket to them relatively easily. And by understanding baseball, I'm not talking about the crazy intricacies and nuances of the sport. You don't need to know when the "infield fly" rule takes effect or how the batting order is affected by a double-switch; I just need you to have a handle on the concept of the pitcher-batter interaction and the difference between a fly ball (or line drive) and a groundball.

If you have just that much of a grasp of the basics of baseball, you can understand cricket.

That's what this site is about.

In this section, I'll use a lot of cricket and baseball terms interchangeably. It's just an easier way to explain things. The rest of the CricAmerica site will be a lot more jargonly accurate, I promise.

Cricket is a bat-and-ball game where runs are generally scored by having the two on-field members of the batting team successfully trade positions after a ball is hit into play by one of the batters. There are a good number of exceptions to this basic rule, but if you just took this one fact into your first cricket-watching experience, you'll have a surprisingly good sense of what's going on.

The most obvious thing you'll notice when watching cricket is that it isn't played on a baseball field. Instead of having areas that are in-play (between the first base and third base lines and extending to the fence) and areas that are out-of-play (anything outside of the first or third base lines), in cricket, there are no baselines, bases, or foul ground. The ball can be hit anywhere. 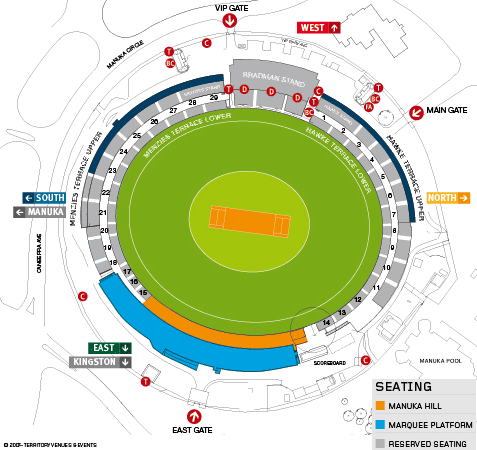 For that reason, the interaction between the bowler (pitcher) and batsman (batter) takes place in the center of the field. Cricket stadiums are often referred to as "ovals" because they're shaped, well, like ovals. Size-wise, the longer diameter of the oval is a minimum of 450 feet and the shorter diameter is 195 feet. (I wasn't actually sure that ovals have diameters in a technical sense, but I just checked -- and they do!)

Because of the omnidirectional nature of the game, fielding positions are really important. Unlike baseball, where the fielding team has nine fielders -- including the pitcher and catcher -- to cover a 90-degree slice of ground, in cricket the fielding team has eleven guys -- including the bowler and wicket keeper (catcher) -- to cover 360-degrees on ground. The positioning of fielders depends not only on the skills and tendencies of the batter and the bowler but also on the format of the game being played. (More about different game formats coming up!)

The actual bowling and batting takes place on what's called the pitch. It's a flattened rectangle that gives the bowled ball a lot more bounce than if it was bowled on the same grass as the rest of the field. (More about bowling and bounce later on.) Toward the ends of the pitch are the wickets. These are the arrangement of three vertical "stumps" and the two smaller "bails" that sit across them. The distance between the wickets is 66 feet, so the distance that a bowled cricket ball travels ends up being pretty similar to the 60 feet-six-inches that a baseball pitch travels.

You don't need much more of a set-up than that.

As far as the actual gameplay goes, unlike baseball where the teams will alternate between batting and fielding multiple times during a game, in cricket -- depending on the format -- each team will either bat twice or only once. Regardless of the format, the match comes down to the team batting last to beat the run total of the other team. The number of runs that the batting team needs to win the the match is said to be the number that they are "chasing."

In formal Test cricket (the game that goes on for four or five days and where everyone wears white), each team will bat twice. Team A will bat until ten of their eleven men are out. (You need two members of the batting side on the field to be able to score runs. More about that later.) After Team A is out, Team B will hit. Then Team A will hit again, followed by Team B. Just like in baseball, if Team B is ahead after Team A's second time batting, there's no need for them to hit. (If the Yankees are playing at home, they don't need to bat in the bottom of the ninth if they're already ahead. It's the same thing.)

In shorter versions of cricket, each team will bat only once and the number of balls they face is much smaller than in a five-day Test cricket match. As a result, the strategy changes as the importance of scoring on every ball is increased.

For someone just getting into cricket, these shortened versions of the game are far more accessible and understandable. Twenty20 -- or T20 -- cricket is currently the most popular form of the game being played. Very much like baseball, each team will face 120 balls and games run around three-and-a-half hours. It's a very easy way to become familiar with the rules of the game. (Purists aren't fans of this version as it takes away a lot of the nuance of the sport. Way more about this elsewhere.)

A longer single-day format has each team facing 300 balls. Again, Team A will bat until either they've reached the 300 ball limit or they've had ten of their batters put out. Then Team B will bat to try to beat Team A's total. The longer format allows for a little more strategy and there's less swinging for the fences.

The ways that batters are "out" are also very similar to baseball. There are ten ways that one can "lose a wicket" (the technical term), but only about half of them occur with regularity.

If a batter hits a fly ball or line drive that's caught before it hits the ground, just like in baseball, the batter's out. 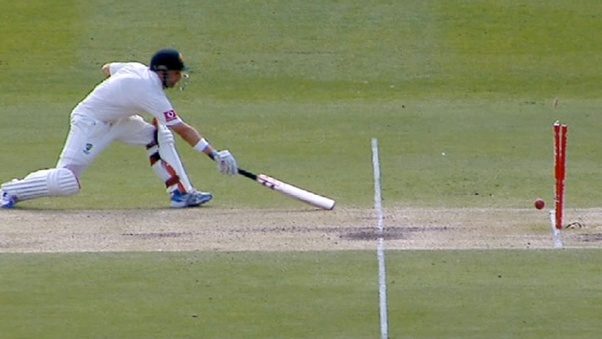 Similarly, if the batter swings and misses at a bowled ball -- or fouls tips it backwards -- and his momentum carries him forward and out of what's essentially the batter's box, the wicket keeper (catcher) can put him out by knocking over the wicket with the ball if he was able to catch it. This is pretty much like getting picked off.

Incidentally, the wicket keeper is the only fielder that wears a glove. Everyone else is trying to snag line drives barehanded. And the ball is even more of a rock than a baseball is. Needless to say, cricket players don't make for good hand models.

Another primary way someone is out is essentially a strike out. A bowled ball either knocks over the wicket directly or is foul tipped into knocking over the wicket. 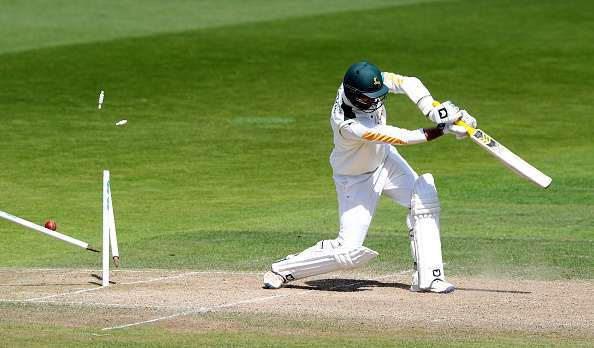 (I used the turn "foul tip" twice just now. I'm using it only to refer to a ball being tipped backwards. Remember, there are no foul balls in cricket because there's no foul territory.)

Finally, since the primary goal of the batsman (or "striker") is to protect his wicket, if it's judged that he used his leg to block the ball from hitting the wicket, he's out. The ruling is called "Leg Before Wicket" or LBW and on TV they have some pretty cool high-tech ways of determining if the ball would have hit the wicket based on speed and bounce trajectory. 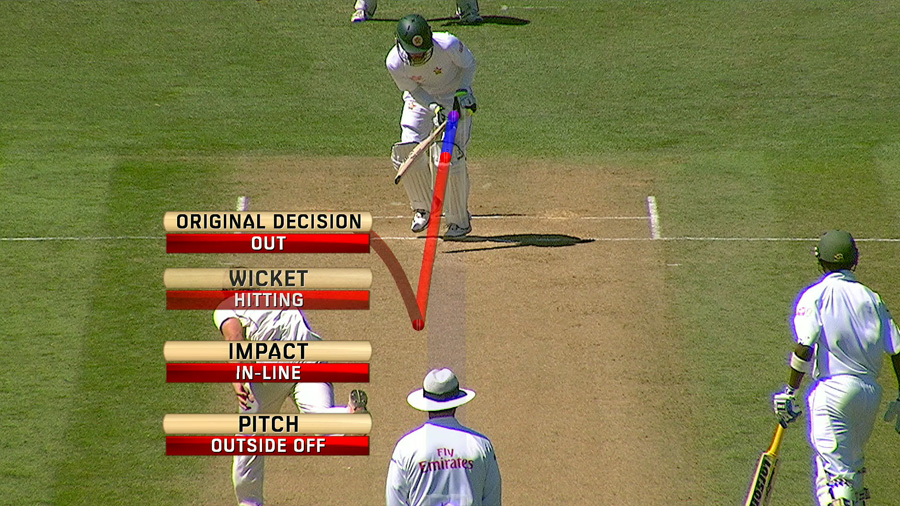 The way the batting team scores runs is pretty easy to understand. If the batter hits the ball and he and his non-batting partner (the "non-striker") are able to switch positions on the pitch, the team scores a run. This usually happens when a ball gets slightly past one of the infielders. (Just as in baseball, there are infielders and outfielders -- they just have cooler names for the various positions.)

If the batter hits the ball to the rope boundary -- where the wall would be in baseball -- it's an automatic four runs and the batting team doesn't have to run.

If the batsman hits the ball over the boundary on the fly, it's six runs. The shorter T20 matches are heavy on "sixers."

There you go. The barest of bare facts about the rules of cricket. There's no reason why you can't now watch some cricket and figure out what's going on. In cooking terms, you now know how to boil pasta. You may not be in the kitchen banging out fine French cuisine, but at least you won't starve.

To go a little deeper into the rules, check out…